skip to main | skip to sidebar

HI again!
some quicky notes from the road.

So, we are in ann arbor, to do a show and I just spent 8 hours setting up. it's really hard, when you only work for say... 7 to 8 minutes at a time, then wander off, chit chat, gossip, eat, get a t shirt, eat, look at your friends new work, sit on the grass and hang out and laugh, drink and talk on the phone look at your other friends new work, and laugh some more, say hello to more folks you haven't seen in ages, wander some more and other stuff and junk. It' a thousand wonders the booth is even up, and it's not FINISHED! I saved the back wall for the morning. ahhhhhhhhrgh
The new paintings do look good tho, and my cute handmade little bench is darling! thank you cindy. I will take photos!

Oh, and you will love this! I got collagen for my top lip! YEAH me!!!!!! now before you start frothing at the mouth.... NOT!!! what I REALLY did was smack my face directly into the top of my booth (it was only half way up....whatever) I had on a hat and couldn't see the f*&%ing thing. I was bending down and BAMB!!!!!!!!!!!!!!!!!!! yep it bleed. now it looks like i had a collagen doctor who sneezed while injecting and i have 2 cuts and a duck bill for an upper lip. and no, i do not look like michelle phiffer. not even close. it hurts like a mo fo, especially when i just went to blow my nose. ouch, damn it, ouch. i think i permanently damaged that middle of your nose, separator thing. maybe my top teeth will fall out, cause my gums took a pretty good whack. and did i mention that there was a small audience? a mini crowd? i was talking to 5 people at the time, they were just standing there watching, one person couldn't even speak to me and ran away. the others (vincent) couldn't stop laughing. which i actually appreciated, cause it must have been really funny, i would have laughed if i saw it. then i put ice on it and felt like a dumbshit.
my teeth hurt.
on the up side, i have not dribbled coffee on anyone yet.
art shows are so glam.

meanwhile, just checked out tom waits tour schedule, and ran across a really cool interview with him, and he mentions some of his favorite musicians. one was Howlin Wolf. good stuff. i can't figure out how to paste youtube addresses into my list thing, but try this http://www.youtube.com/watch?v=4Ou-6A3MKow or google Howlin Wolf and it's title is How Many more Years. really, it's all good. blues, hot harmonica, great voice.

okay that's it for today.
LOVE TO YOU!!
XOXOXOX
fatlips
Posted by Lynnie at 8:27 PM 2 comments:

So the topic for today is: TURNING POINTS!!

A TRUTH: I might suck at this blogging thing. Ok, I said truth, so let's rephrase. I definitely suck at this blogging thing. I think blogs are usually done much more often than this. I actually forgot my password and stuff this time. it's been that long. my blog is more along the lines of the occasional newsletter, or maybe it's like one of those Christmas letters that catch you up on the yearly goings on, but with less lying.

ANOTHER TRUTH: My new favorite thing. well, there are so many really, but I do LOVE this Youtube video about Christian the Lion. OMG its a tearjerker and sweeter than honey. I have watched it at least 7 times. today. The music is a lot cheesy, but it's pure love. two guys and their once pet, now wild, lion. It's kinda "Born Free" with 2 guys who make me think of the Bee Gees. And while I am typing, why do they call themselves the Bee Gees anyway??? weird. I have my own lion at home, only he is a golden retriever. He truly spreads the love in that "I have missed you so, so much since I last saw you 4 hours ago" way. The feeling is mutual. Watch the video.

ONE MORE TRUTH: I only watched it 3 times today, and 4 yesterday which equals 7. damn truth.


Really, there is so much to share since last time. Really nice, healthy, good things are happening. but lets start here. My artwork is changing! Wow. I think this is a good thing. yes, clearly, it's a good healthy thing. It has been shifting for a while now, as all good art should, and it's interesting to see what is coming out. HOw funny it is that we really don't have such a grand plan as we might think, and when I say we I mean me. I could not have told you what I was doing with all these paintings, and I surely didn't see an overall theme at first, but they all seem to be about a small moment in time. Now it occurs to me that most of the new paintings deal with that space before an epiphany. not the actual epiphany, but the harbinger of. Some little insight in life that leads you towards a new knowing. I love epiphanies, and even had a wall in the studio called "epiphany central" with jotted blue index cards serving up my new ah ha's. Hey, do I get any sort of prize for being the person who used the word EPIPHANY more in a paragraph than anyone ever? Okay, so, lets get to you. I am wondering what is going on out there. Have you been experiencing some major shifts?? minor tugs? teeny glimpses of newness??? I always think it's fascinating when you start chatting, how similar things are going on with each of us. I also have this new fondness for horizons. loving that line. it feels very hopeful and open like the beach. like a good friendship.

Well, I am off to a show, Ann Arbor, in the morning. I have no idea how the new paintings will fly, but it's not the point. I am following them to where they take me. They are new, they are teaching me things and they will evolve. That's the game. It's a great game, yes?

Truth number 4: I hope you are are well and engaged in things that bring you pleasure and growth.

Truth #5: last truth sounded sappy, but I mean it.

Truth six: every cool line in this blog is most likely lifted from my brilliant friend jamie morris the writer.

Truth lucky #7: she made me say that.

later taters!!!
xoxo
lynnie
p.s. thanks fred for sending the youtube of Christian the Lion
Posted by Lynnie at 9:17 PM 1 comment:

a balloon for every year 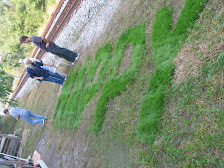 outside the back door of the studio

Lynnie
Winter Park, Florida
I am a visual artist. I work in mixed media, which for me is a combination of collage, painting , drawing, altered photographs, found objects and the written word. I have tons of stuff, collections of all sorts. over 10,000 photographs (late 1800's mostly) balls of twine, books, found journals, leaves. part of my process is organizing chaos. I believe in play, exploration and freedom in your work. I also think it's okay to suck at stuff, especially while you are learning. as I do at guitar. and singing. and oil painting.